Look at my shiny microscopes!

Today I have been polishing two microscopes that had chipped paint work.

I started by lightly sanding around the chips  with 1500 grit paper, I filled in the chips with layers and layers  of hammerite smooth paint (sanding lightly between each layer of paint to make a key for the next coat). When the chips were filled and level I sanded the whole microscope again with 1500 grit sand paper to form a key and sprayed it with spray enamel (masking off delicate areas).

I left the spray enamel to dry for a few days then went over the microscope with T-cut, next I used Meguiar’s ultra cut which gives a really high sheen and finally I applied a finishing polish. Meguair’s ultra cut is bloody marvellous stuff. I’m pretty chuffed. The polarizing microscope started off with no paint at all on its feet. The phase scope’s paintwork was in better condition but it had a few large chips on the base and on the stand.

Tomorrow I shall post pictures of the cobwebs I found in the 45X objective, I promise!

Spiders in my microscope

I think it’s a cobweb

I mentioned yesterday that I bought a very tatty microscope to do up. Well this isn’t from that microscope, it’s from another microscope which I bought for spare parts. It came with four objectives on it, one of them is a Cooke 45X oil objective which I am reliably informed was designed by Bryan Payne – he of the well known book “Microscope Design and Construction”.

I already have one of these objectives but I was jolly pleased to have another. I took it off the microscope to inspect it and saw this. I think it’s a cobweb.

Spiders have been making their home in my microscope objective! I can’t imagine they caught many flies.

I shall have a look at the stuff under the microscope when I have space to set one up. At the moment my bench is covered in freshly painted microscopes and I can’t move them until tomorrow.

Could be mould, but I think it’s cobwebs.
I’m amused.

When I’ve cleaned it up I shall take a picture through it, to see how well it survived the spiders. Cooke objectives are tough. I wouldn’t be at all surprised if it’s perfectly usable.

Dark ground condensers can be used with objectives that have numerical apertures up to 0.95. To create the dark background of dark field illumination the centre of the cone of light that enters the objective is blocked out, either by a patch stop or by a special dark ground condenser. Only light from around the edge of the cone of light passes through the specimen. This means that if the numerical aperture of the objective is higher than that of the condenser, the light will  miss the objective.

Patch stops can produce excellent dark ground if they are optimised, but only with lower power objectives. it gets tricky using a patch stop with objectives over about 20x magnification and near impossible over 40x. You really need a funnel stop (or an objective with an iris)  and a nice dark ground condenser for the higher magnifications.

I’m off to have a fight with my Meopta now. Wish me luck. I desire pretty pictures.

I came, I saw, I conquered

By George I think she’s got it!  I have conquered the paint work. I ended up using plasti-kote spray enamel from a rattle can.

It’s not absolutely perfect – there are a couple of runs in the paint but considering I’ve never spray painted anything before I’m quite pleased. I will have to leave it to cure for a few weeks before I consider sanding the runs but I shall probably leave it as it is. The runs are quite small and I think I can live with them.

At least it’s an improvement and all the paint it the same colour and sheen. I rather suspect that getting new paint to blend with old paint is impossible unless you are an experienced coach builder.

This evening I shall do some sewing.

Bloody paint is driving me mad!

I mixed my black hammerite paint in a 1:1 ratio satin:gloss, I thinned it a bit (15% ish) and used a gloss roller to apply it to the Cooke Troughton and Simms microscope.

The paint is full of little bubbles.

ARGHHH! I’ve used gloss rollers on doors with no problems at all, but it seems they dislike metal. If I’d known i’d have layed off the paint a brush or used a brush to start with. I’m going to have to wait for it to dry and sand it for the umpteenth time.

On the plus side I think the 50/50 ratio of satin:gloss might be correct. I think. I’ll have to wait until it’s completely dry before I can say for sure.

I have just noticed that Hammerite say that satin and smooth paints should not be mixed. I can’t imagine why. They’re all the same solvent base. I’m wondering if there’s some problem with mixing them or whether it’s just a matter of them not wanting to recommend an untested combination in the same way some clothes manufacturers put “dry clean only” labels on washable items to save the cost of testing them.  It may be that mixing the two kinds of paints makes them less than perfect for their intended use outdoors in all weathers. If so then it is of no importance to me. I shan’t be leaving my microscope exposed to the elements.

I will win the battle of the paint. I shall not be beaten by a bit of black pigment in solvent.

I see a microscope and I want to paint it black…

Forgive me Mick Jagger and Keith Richards, I was trying to think of a witty title and that was the best I could come up with.

The story so far: Japlac is too shiny for my Cooke Troughton and Simms microscope so I tried Hammerite satin. Hammerite satin is not shiny enough. It’s a lot better than the high gloss Japlac but it’s not quite right. I have a new cunning plan; I shall mix a little gloss Hammerite in with the satin paint. I shall start with a 2:1 ratio and go from there.

I’ve buggered my hand up again. The hurtiness seems to be travelling down the tendon from my index finger towards my wrist. Maybe it will travel down my wrist, up my arm,  into my shoulder, up my neck and into my head from where I can sneeze it out?

On the other hand (pun not intended) I may have to go to the doctor.

Getting the paint finish right

I have been using Japlac on my Cooke Troughton and Simms microscopes but I have found it to have too high a sheen. No matter how much I polish the original paint work I cannot get it to a high sheen like the Japlac has. Where I have filled in cracks or chips the new paint is very obvious. I tried using emery paper to take the sheen down but then it looks too rough.

I have decided I need to abandon the Japlac. I have bought two hammerite paints: satin finish and smooth finish.

The amount of gloss a paint has can be expressed as a percentage of the light which is reflected back at an angle of 85 degrees. As no manufacturers bother to disclose this helpful information on the tin I have no option except to assess the two paints using an old fashioned method: eyesight.

I’ve painted the back of an old envelope and a dog food can to see what it looks like. As far as I can tell so far by eye, smooth means gloss finish (80% or more reflectance) and the satin is a lower sheen. Maybe 50% ?
It’s hard to guess how much light is being reflected but I think the satin paint will work out well.

Happy 2014 earthlings, I hope it’s a good one. May your microscope stands be shiny and your objectives clean and clear.

According to Merv (who knows everything there is to know about microscopes) restoring paintwork is easy but tedious. I haven’t found it to be easy although I’d agree with the tedious part.

I have been attempting to perfect the paintwork on my Cooke Troughton and Simms polarizing microscope. I sanded the bits where the paint needed re-doing, I primed, I put on Japlac, I let it dry, sanded with a very fine grade sandpaper and repeated. Japlac is supposed to brilliant in that it doesn’t leave brush marks – all lies. I have brush marks, I sand them down and I’m back to the bare metal in places and still have brush marks. I’ve tried thinning the paint. No use.

I’m off to buy a gloss roller because as Merv says  “Continue until the new paint is slightly proud of the surface, or old age has carried you off…”

I’ve got things to do. I’m not spending the next 30 years on the paintwork.

I SHALL CONQUER IT!

I’ve been cleaning the outsides of the Cooke Troughton and Simms polarizing microscope objectives all day today while I’m waiting for the paint to dry on the stand. Not really difficult but time consuming. The outsides are filthy. It’s taking about 2 hours to do each one.

I have used about 100 cotton buds so far. I have to make sure I don’t get any polish on the lens. I’m quite good at nimble fingered stuff. I can get within about 2mm of the lens confidently.

Can you tell which ones I have cleaned? ha ha! Oh, and don’t worry, I haven’t stripped the paint off the 20X by accident. It didn’t have a painted band to start with.

Cooke Troughton and Simms, Microscopy - all posts, Restoration and cleaning

Today’s project, more precisely, this week’s project. My Cooke Troughton and Simms polarizing microscope has been stripped down and cleaned. It was very grubby and covered in old grease, so much so that it was sticky to touch. Horrid.

I’ve had a go at restoration before with acceptable results. It’s a learning curve. Some things worked out better than others but I’m pretty certain I haven’t ever made anything worse.
I’m not confident enough to do anything to the insides of the tube yet. Just a quick poof of air with the air-poofer.

The CTS has been washed with vulpex soap, cleaned with Rennaissance pre-lim and it’s come up quite nicely. I have used a whole packet of cotton buds and dozens of lint free cloths and various bits have been degreased and regreased.

I had a bit of trouble with the coarse focus. The pin is slightly bent so I shall have to chat up my neighbour to get it straightened. He is quite handy with bits of metal, he can chat for England though so I need to allow at least two hours when I go round.

There was some kind of resin stuck fast to the feet. Initially, I thought there was rust and the paint had bubbled up but it was resin. I’ve sanded it down and now I need to repaint the sanded bits. Primer us on. I’ll paint before I go to bed.

This is the part I dread. I’ll paint and sand repeatedly and I still won’t be happy with the result. I think that’s where T-cut comes in.

I haven’t touched the optics yet. They won’t be too much trouble. 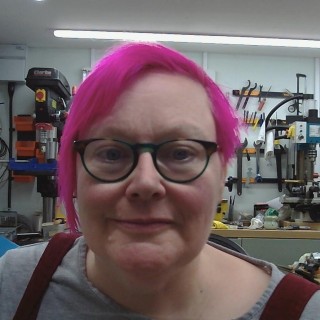